Religious discrimination against Muslims and Arabs in the United States after 9/11.

Religious discrimination against Muslims and Arab appearance people rose steeply in the United States after 9/11.

Consider the differences between Arabs, Muslims, and Arab Muslim extremists and fundamentalists. 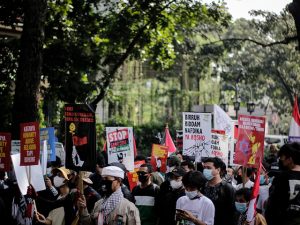 What may be done to maintain the American guarantees of religious freedom and increase knowledge about Muslims and Arabs?

o Islam Today: An Introduction to Muslims and Their Faith
o Muslims in America Face Suspicion and Prejudice
o Oklahoma Fights Stereotypes after 9/11